Visit the Course Catalog for the official course description and listing

Please note:  THTR 312 [Plays in Performance] and THTR 369 [Theater Artists in Focus] can be taken more than once providing that the specific topic for the course is not a repeat.

Through lectures, discussions, hands-on-experiences, master classes with visiting theater professionals, and performances outside of class, this course introduces students to significant texts, ideas, and crafts essential to the study of theater. Projects involve acting, directing, design, and theater criticism; writing assignments familiarize students with the analytic tools and accepted vocabulary of theater scholarship.

A survey of plays from different eras and performance traditions in diverse cultures; introduces students to evaluating, discussing, and writing about theater from a global perspective.

Available to designated cast members of a faculty-directed College Theater production. May be repeated up to four times for credit.

Available to designated crew and staff of a faculty-directed College Theater production. May be repeated up to four times for credit.

THTR 130 Acting I: Acting and Improvisation 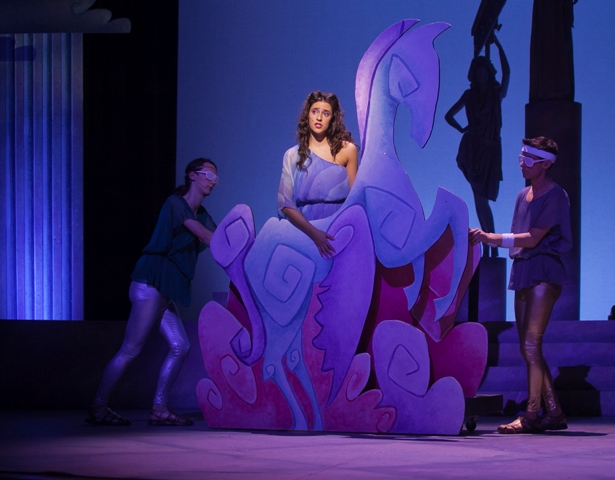 Aleni MacKarey ’16 as “Kira the muse” in the Theater Department production of Xanadu, 2014.

This workshop style course will introduce students to various fundamental techniques of acting and improvisation, with special emphasis on sensory awareness, observation, concentration, body movement and vocal development. Students will develop their imaginations and creative processes through performance situations involving improvisation, scene study and monologue work. Second semester seniors must have permission of the instructor to take the course.

This course will focus on how theatrical forms have changed from time to time and culture to culture, considering historical context, periodicity, genre, conventions, style, theatrical spaces, acting style, and technical effects. (Cross listed as ENGL 207)

An introduction to the history, theory, and practice of technical theater, focusing upon stage management, construction, painting, rigging, and electrical practices. Laboratory sessions in the theater shop and backstage assignments ensure hands-on exposure to topics discussed in class. Normally closed to seniors.

This workshop extends beyond basic acting and training to offer a more in-depth study of the craft of acting. Students will utilize exercises, improvisation, and detailed script analysis as they build and develop characters. Students will perform in a range of scenes from modern American realism and from Ibsen, Strindberg, and Chekhov.

Prerequisite: Theater 130 or permission of the instructor. 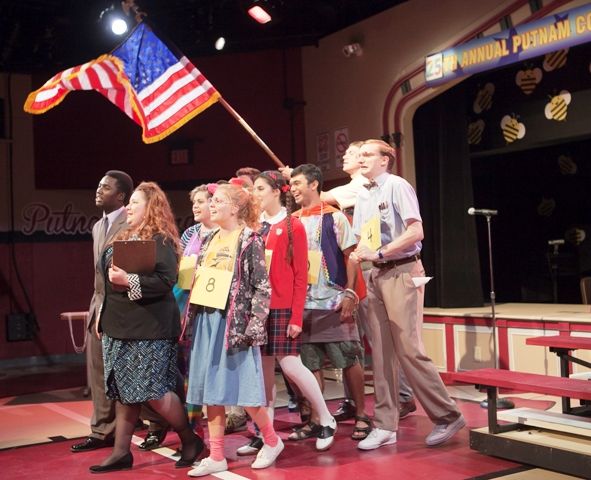 This study of musical theater combines a survey of the history and literature of this uniquely American art form with introductory training in its practice and performance techniques. Students will investigate the structure, terminology, practitioners, organization, and conventions of the musical while they explore its repertoire through either preparing scenes and songs for performance or doing dramaturgy-based research for presentation.

Prerequisite: THTR 107, THTR 130, or permission of the instructor.

A detailed study in either a workshop or classroom setting of a particular aspect of theatrical endeavor. Usually offered in conjunction with visiting artists or theater residencies.

Prerequisite: Theater 107 or permission of the instructor.

Through applying the methods of dramaturgy to reading and researching selected plays, students compare and examine performances of those plays in differently realized productions on stage, in film, and through adaptations in such genres as opera and dance. Special attention will be given to issues of interpretation, historicity, and conventions in various media.

Prerequisite: Theater 107 or permission of the instructor.

Julian Sands talks to directing students about staging the plays of Harold Pinter.

This course explores the director’s art and responsibility in the theatrical process,including casting, rehearsal, and organizational procedures from script analysis to performance. Discussion and practice in the principles of composition, picturization, movement, and blocking, with attention to issues of style, concept, and stage spaces. Students direct scenes in the laboratory and a short play for public performance.

This workshop style course offers advanced study of acting, with special emphasis on exploring and enacting the theatrical styles and performance conventions from a wide range of time periods, genres and cultures. Students will perform in projects drawn from diverse pieces that may include the plays of the Ancient Greeks, Shakespeare and Molière. Topics change and will be announced during registration; may be repeated for credit when offered on different topics.

Prerequisite: Theater 230 or permission of the instructor. 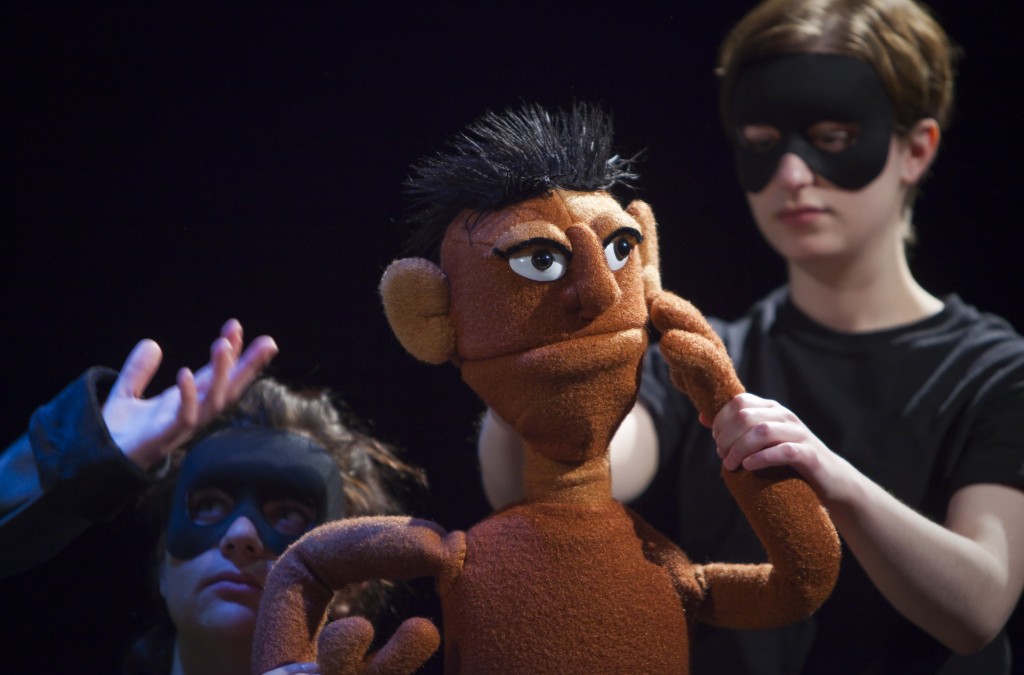 Students explore the practices of theater for young audiences and methodologies of theater in education through readings and research combined with a lab experience in which they either rehearse and perform or provide technical or design support for a play created for young audiences. Students develop educational materials for the production and lead post performance workshops with area school children who attend the production. Rehearsal and performances are scheduled during required laboratory hours.

An in-depth study of one or two theater artists, usually in conjunction with a College Theater production showcasing their work. The theater artists selected vary from semester to semester, and the focus will be announced during the registration period; may be repeated for credit when offered with a different focus.

Advanced study in either a workshop or classroom setting of a particular aspect of theatrical endeavor. May be repeated for credit when offered on different topics.

Prerequisite: a 200-level course in Theater or permission of the instructor.

Practical experience in a professional theater or theater organization. Written reports are required of the student, as is an evaluation of the student by the supervising agency. Although a student may take two theater internships, normally in the junior and senior years, only one may be counted toward the Theater major. Advance approval of the Department Head required.

Tutorial study in theater practice, initiated by the student and pursued independently under the guidance of an instructor from whom the student has gained approval and acceptance.

Prerequisite: Theater 107 or 221, and permission of the instructor. 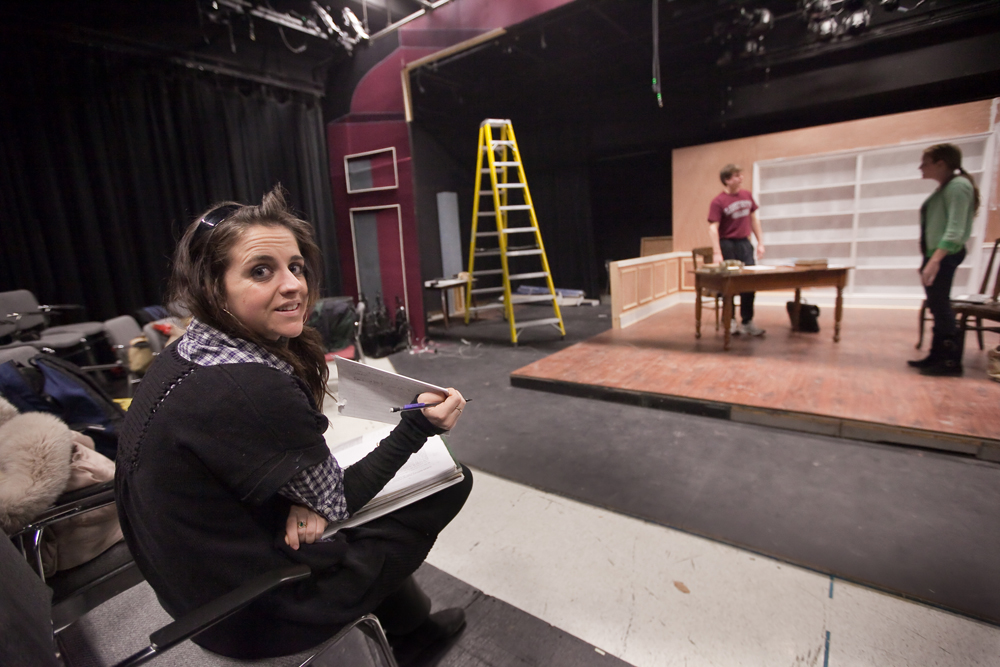 Under the guidance of theater faculty and normally during the senior year, the student will undertake an advanced project in one or more specialized areas of theater (e.g., acting, directing, design, criticism). The project will serve to assess the student’s theater education and demonstrate the student’s potential as a theater artist and/or practitioner.

Prerequisite: Permission of the Department Head.

Tutorial sessions related to the student’s investigation of the area chosen for his or her honors essay. Open only to candidates for honors in theater, who take THTR 495 instead of THTR 400.

Prerequisite: THTR 207 and permission of the Department Head.