We believe in angels

When Lafayette College was celebrating its 65th birthday back in 1891, The American Dictionary of Slang defined the word “angel” for the first time as a person who backs or invests in a theater production.  Over a century later, the Theater Department at Lafayette College still believes in angels, and we know what a difference theater angels can make.

You may not get a halo, but you’ll be in heavenly company.

Theater Angels have done a lot in the past few seasons: 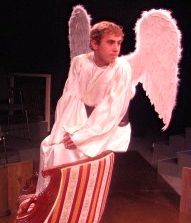 Mike Tumbles in “The Angel Intrudes” by Floyd Dell at Lafayette in September 2008.

See what just a few dollars from a Theater Angel can do?

Help Lafayette Theater continue to spread its wings across campus, into the local community and even beyond.