The National Crane Project IS CONTINUING and will carry on the legacy of our inspiration, David Heard.  Click here for more info on how to get involved and  carry on David’s dream. 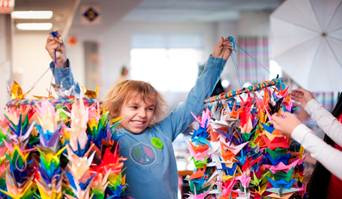 Japanese legend says that anyone who folds one-thousand cranes will be granted one wish. David Heard knows it’s the stuff of folklore, but he wants to help brighten the lives of other children undergoing treatment for cancer.

The ten-year-old Easton, Pa., boy got the idea to fold cranes after seeing a campus stage production of A Thousand Cranes at Lafayette College this fall. The play is based on the true-life story of a 12-year-old Japanese girl who survives the atomic bombing of Hiroshima only to develop leukemia years later. Hoping to stave off death, she starts folding paper cranes, but dies before completing 1,000.

Mary Jo Lodge, assistant professor of theater, and  Lafayette students had given David the 1,000 colorful cranes they had folded for their production, along with their wishes for good health—and he started folding cranes of his own, to give to others. Students from Lafayette began working with local school children, other young cancer patients—even local women prison inmates—to share David’s plan and offer crash courses in origami and together they began folding thousands more.

The local media wrote a story about David and it’s inspired a folding frenzy across the Lehigh Valley of northeastern, Pa., about 60 miles west of New York City. Folded paper cranes started pouring in, and after some stories ran nationally, cranes have been arriving from around the country by the thousands.

Originally, David’s father, Lafayette College alumnus Tom Heard, says his son had planned to send 5,000 cranes to each of the five pediatric cancer centers where he has been treated for Neuroblastoma, a serious form of cancer, but response to his crane-folding quest has been so great he expanded his goal.  David now wants to try to get a set of cranes in every pediatric cancer center in the country: more than 220,000 cranes.

“We get a package at least once a day,” says his mother, Susan. “They’re all over my house.”