The Theater Department will hold open auditions for our 2022/23 productions directed by faculty and by seniors who are directing productions for their honors thesis projects.

Lafayette Theater Department announces
Open Auditions for
Head Over Heels
Songs by the Go-Go’s; Adapted by James Magruder
Concept and Original Book by Jeff Whitty; Based Upon The Arcadia by Sir Philip Sidney

From Broadwaylicensing.com: “Head Over Heels is the bold new musical comedy from the visionaries that rocked Broadway with Hedwig and the Angry Inch, Avenue Q and Spring Awakening. This laugh-out-loud love story is set to the music of the iconic 1980’s all-female rock band The Go-Go’s, including the hit songs, “We Got the Beat,” “Our Lips Are Sealed,” “Vacation,” Belinda Carlisle’s “Heaven is a Place on Earth” and “Mad About You.” A hilarious, exuberant celebration of love, Head Over Heels follows the escapades of a royal family on an outrageous journey to save their beloved kingdom from extinction—only to discover the key to their realm’s survival lies within each of their own hearts.”

Head Over Heels, which is a mashup of Shakespearean style with 80s pop, has 1 any gender, 4 female and 3 male major roles, and approximately 8 additional roles for an active singing and dancing chorus (who appear in more songs and scenes than any of the principals). The musical is gender-inclusive, and all who audition can decide which roles they wish to be seen for. Our Lafayette production seeks to include actors of diverse races, nationalities, sizes and abilities, however, there are no non-singing roles.

Casting Breakdown (from Broadway Licensing):
Basilius: King of Arcadia. A sexy, good ol’ boy. A hothead, but not a despot. Male, Tenor
Gynecia: Queen of Arcadia. Sexy, wise, beautiful. Female, Alto with belt
Pamela: Basilius and Gynecia’s older daughter. Confident and obsessed with her appearance. Known to be the most beautiful bachelorette throughout Arcadia. Eventually in love with Mopsa.  Female, Mezzo with strong belt
Philoclea: Basilius and Gynecia’s younger daughter. Shy and a “good girl,”  In love with Musidorus. Female, soprano with belt
Mopsa: Handmaiden to Pamela. Warm, skeptical. Sometime narrator of the show.  In love with Pamela. Female, Mezzo with High belt
Dametas: The King’s viceroy; father to Mopsa, Comic servant, Eventually the beloved of Pythio
Musidorus: A young, not very bright shepherd who loves Philoclea. Spends much of the show disguised as a woman, Cleaphilo. Male, High Tenor.
Pythio: The Oracle; powerful, mysterious. Demanding. Great sense of humor.  Eventually the beloved of Dametus.  Any gender.  Scored for Bari-tenor or Alto.
Ensemble: Unique, charismatic inhabitants of the kingdom of Arcadia. Strong singers and dancers.

Initial auditions will be self-recorded video submissions. You may use your phone or any recording device to film yourself with audio and video. For your initial audition, please sing approximately 1 minute of any The Go-Go’s song (or any similar 1980s style pop song) which shows off your range. You may sing without accompaniment or use accompaniment from any source you wish (including YouTube). Accompaniment should not include vocals. Videos should not exceed one minute, so choose a portion of your song to sing. Be sure to identify yourself in your video. Callbacks, if needed, will be held on Lafayette’s Arts Campus on the evening of Aug. 31st and will involve a dance call, and possible additional singing from the show (which you will be taught). If you wish to prepare in advance, the cast recording is widely available, including via free Amazon music streaming (with Prime).

VIDEOS ARE DUE BY AUG. 30th AT 5PM.  Earlier submissions welcome.  Submit all videos, along with your audition information and conflicts, via the Google form linked here:

Head Over Heels will run November 9th – 13th in person in the Weiss Theater in Buck Hall at Lafayette. You must be available for all performances. You can be in/work on both Arcadia (our first production of the 2022-2023 theater season) and Head Over Heels – we are working around Arcadia’s schedule. All cast and crew positions are open, except for stage manager, and academic credit can be earned for roles onstage and off.  Head Over Heels will rehearse a few evenings a week, and some weekday afternoons, depending on availability, until Arcadia closes, and then will rehearse Sunday afternoons and Monday through Thursday evenings in October, with additional times added during the final two weeks in November. We will NOT rehearse during Fall Break. Masking for COVID protection will be required during the rehearsal process, but not for performances. Night classes may be accommodated until the week before the show.

Head Over Heels is also seeking an on-stage band for the production.  Musicians need to read music for their instrument and should be able to play in pop style. We need the following players:

If interested, please prepare a one-minute video recording of you playing your instrument, preferably playing a pop or rock song (ideally a The Go-Go’s song).  ¼ Practicum credit is available for musicians, as well.  Submit audition videos and relevant contact info here:

With questions or for more information, contact Prof. Mary Jo Lodge via e-mail at lodgem@lafayette.edu. 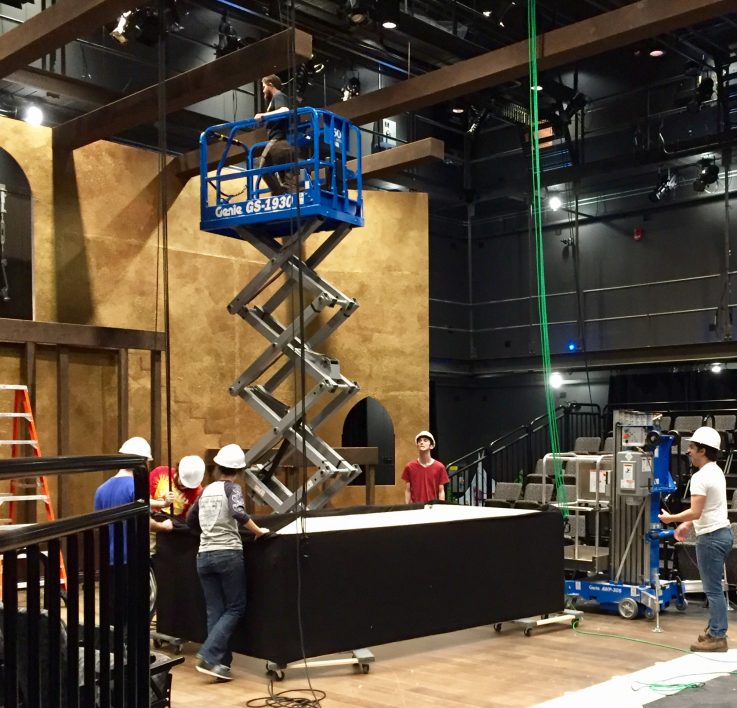 The Theater Department is seeking students interested in joining the Technical Crew for our exciting  productions.
Our Pulse Our People